Last summer I met Ans van Baal-Clijsen for the first time. Ans's motivation to participate as a model for the GPG showed that she has a great admiration for artists who can portray realistically. Oops. I told her that I started around 2008 with paintings and drawings about ... the shapes of brain cells. In 2013 I had an exhibition in which the brain cells and other cells entered into a new relationship with the shapes of the human body. On the basis of one of my source books I showed Ans how my creative process comes about and that I am therefore mainly interested in what is going on in her and not so much in how she looks.

She turned out to be active for the Dordrecht Museum and I am a museum teacher for the Dordrecht Museum, among others. In that role, I followed a training this year in showing people with dementia and their loved ones. When I told that it went quiet for a moment… her deceased father and now 2 of her brothers are dealing with dementia. For me this was the circle, this had to be the starting point for my "portrait". A portrait about the elusive of the many phenomena of dementia, the syndrome that plays such a big role in the life of Ans and that we will all have to deal with - due to the aging population.

We Got Your Back 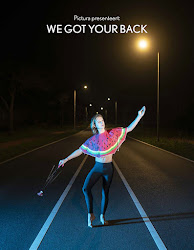 "Another beauty! Would love to see the process ..."

"Blue is soothing, love the color and the art"